On behalf of the whole JoomlArt team I wish you all the best for the year 2011. May most of your resolutions will get realized.

Only some hours left for most of you until the old year is gone. We would like to devote these last few hours rethinking about what has been achieved by our team and what not. We had a very ambitious plan at the beginning of 2010. We could not accomplished all our targets, but what we could is not too bad either:

Great team for the community

Having these guys on board our time on JA.com gets more fun and informative:

Arvind: Our Uber-Super-Admin, without him, it's a big mess in forum and support. More bugs would be released, more users won't know where to find things, whom to contact... you name it.

Robert Vining: A well known voice in Joomla community since it's beginning. He is going to be our Community Manager, hosting cool activities and listening to your needs.

Tom Tran: The guy behind the blog, promotions, doing some social engagements and is good at one-on-one VIP customer small talks. Don't be too hard on him, he can only work 16 hours daily and can't speak more than just 4 languages.

If there is anything that would make your life easier here at JoomlArt.com you can always buzz one of them and it gets somehow solved.

We have started to actively reach out to the Joomla community by reserving a budget of $10,000 for community sponsorship in 2010. We have been:

We relaunched a fresh engaging Blog 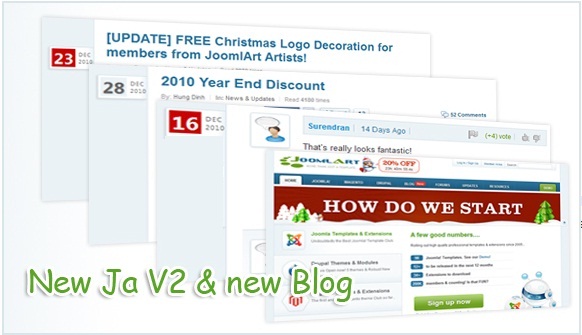 It is JoomlArt's prime voice and needed redefining. Standard regular product releases, updates and bug fixes are put into Updates section. We dedicate more time and resources to create more tutorials and valuable news around web development and Joomla in particular.

With over 200.000 downloads on JA.com T3 Framework belongs to most popular template frameworks for Joomla, thanks to it's power and flexibility. Now almost all our templates are upgraded to the new framework version and people seem to see high value in it.

Early on we had Joomla 1.6 in mind and already released JAT3 v2 for Joomla 1.6 months before J1.6 RC1 has been announced and assure our preparation to upgrade top downloaded templates to J1.6.

JA got more extensions listed on Joomla Extension Directory this year, especially noteworthy are JA Amazon S3 and JA Extensions Manager. JA Voice and JA JobBoard made available under GNU / GPL license. Some further extensions like JA K2 filter and JA Animation add to the value of the community.

With this tool you can "PLAY BEFORE YOU PAY". Set up a new Joomla site with any of our templates on a demo server and see all the functions live in action applied to your sample content. This makes it much easier for new visitors to get familiar with our products and find a decision whether or not to join club membership.

JA site has moved to the clouds 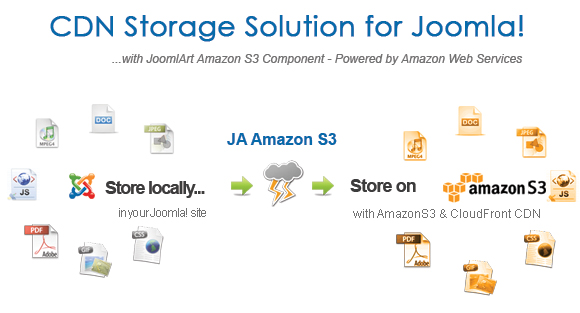 After successfully upgrading our main site to JA V3, we have made an in depth review of almost every services and solutions around the Cloud Computing & CDN industry. We were amazed by the performance improvement that can be achieved if using services of some big players including Amazon, Rackspace, Softlayer.

Finally we focus our development efforts to work with Amazon's cloud solutions. We developed the component JA Amazon S3, which we do apply now on our mainsite. For now all of static content including images, css, javascripts has been put on the CDN of AWS CloudFront. 2010 was just the beginning, I believe cloud, CDN, and SaaS will be very hot at JA in 2011.

We launched a 99designs contest

This helps us to diversify the design styles, themes & raise the bar of the quality of all products with modern look & feel, smart & rich features, convenience of customization. These values will be further pursued by the JA team.

And What Did We Fail to Achieve?

Out of the 10 things we would like to achieve we could not develop the following two extensions and also try to give you a reasoning why we failed:

Like JA, - but another dimension :) - Google keeps being inovative and improving their Google Docs continously. With Gform we planned to:

However, Google Doc's code changes in a matter of weeks and we would face many difficulties in maintaining and provide support to user, which is the reason we have postponed this project indefinitely. But we will keep an close eye on the development.

2. JA Toolbar as a service

As u can see we are using the toolbar on our demo site and which is hosted on google engine (Google's trending cloud solution for SaaS) but configuration is way more complicated then we wished:

At the end of the day, we realized it's way to complicated for any standard user and the purpose of toolbar usage is not hyper popular feature so JA doesn't release it. We don't want to make your life harder and recommend to use wibya or some other social toolbar in case you really need it for better navigation.

So what's to be expected for the new year ?

This is already a very long story for it self. We will tell you about our goals and plans in a coming blog post. I hope you will follow us further and support us to achieve our goals.